Actualités > I Mourn for Falafel by Michy

I Mourn for Falafel by Michy 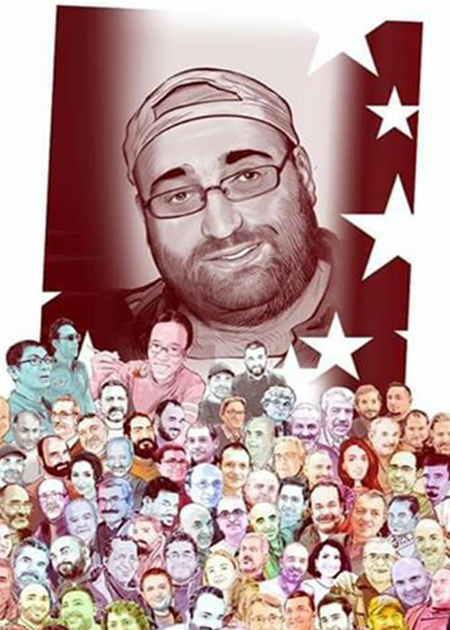 I Mourn for Falafel

Matvey Natanzon, nicknamed "Falafel," for his love of that Middle Eastern food staple, was an extraordinary man in the backgammon world. He was twice ranked #1 "Giants of Backgammon", and his documentary film "Falafel's Game" was broadcast in Israel, his birth country.

This backgammon genius passed away on 14th February 2020 at 51 years old. The backgammon world was in deep sorrow, and hundreds of people posted photos on social media, expressing their heartfelt condolences.

I got notice of his death through Sarah Brady, one of his caretakers in an assisted living center in Buffalo, New York. I tried to write something on Facebook immediately but I couldn’t. I kept silent. I don’t know why. Eventually, however, about two weeks from his loss, I started writing about him. 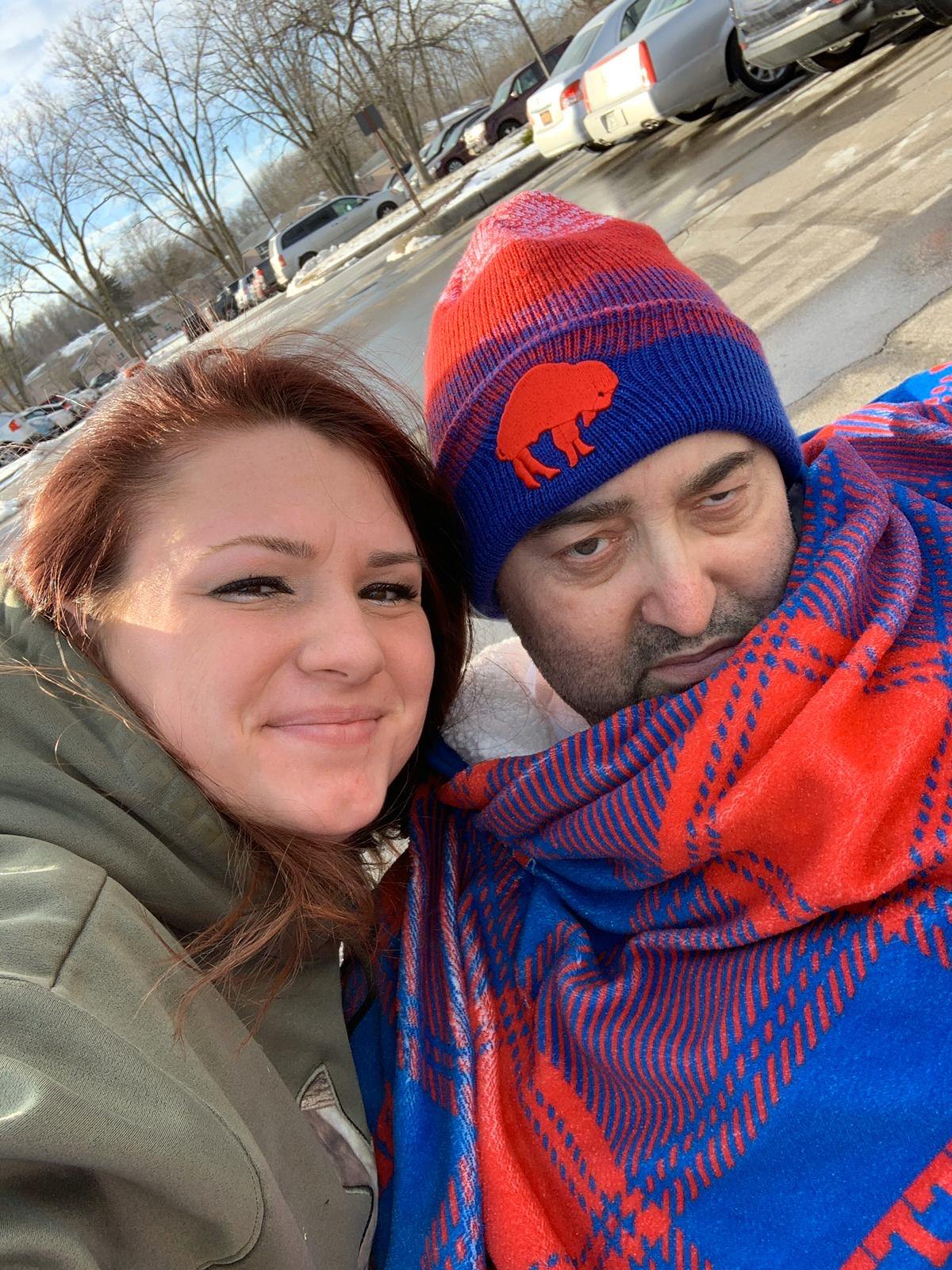 I spent all my time on backgammon starting in 1997. I was possessed with the game and highly focused on improving my skills. Absorbing brand-new knowledge and discovering a unique way of thinking gave me endless pleasure. By 2001 my skill was the same as the world's top 10 players according to "Snowie" which was the most advanced computer program at that time. Though I won the biggest tournament in Japan that year, I was still an unknown player in other countries. Shortly thereafter, I began travelling to tournaments outside Japan.

I don't remember exactly when I saw Falafel for the first time, but I started talking to him around 2005. In 2009, I was writing each dice roll and checker play on paper to record my matches. This was before we had overhead cameras to record matches. Falafel worried my behavior and gave me precious advice. "Stop writing your match while you play!", he said. Falafel insisted I was lowering my play level by doing that. He convinced me and I stopped writing. Soon I saw the value of his words as I won 2nd place in French Open Masters in October 2009, which was a big and prestigious tournament. I publicly thanked Falafel for helping me win the biggest prize money ever for me. He was proud I took his advice and he shared in my joy.

PRIDE OF THE GAME

Falafel had a fierce pride in his own backgammon skill and ability to analyze the game. Though he was gentle and compassionate, he was so strict in backgammon that he hurled abuse at bad plays without mercy, especially if he was commentating on matches of close friends like Matt Cohn-Geier or Arkadiy Tsinis. Falafel could trash talk with the best of them ! 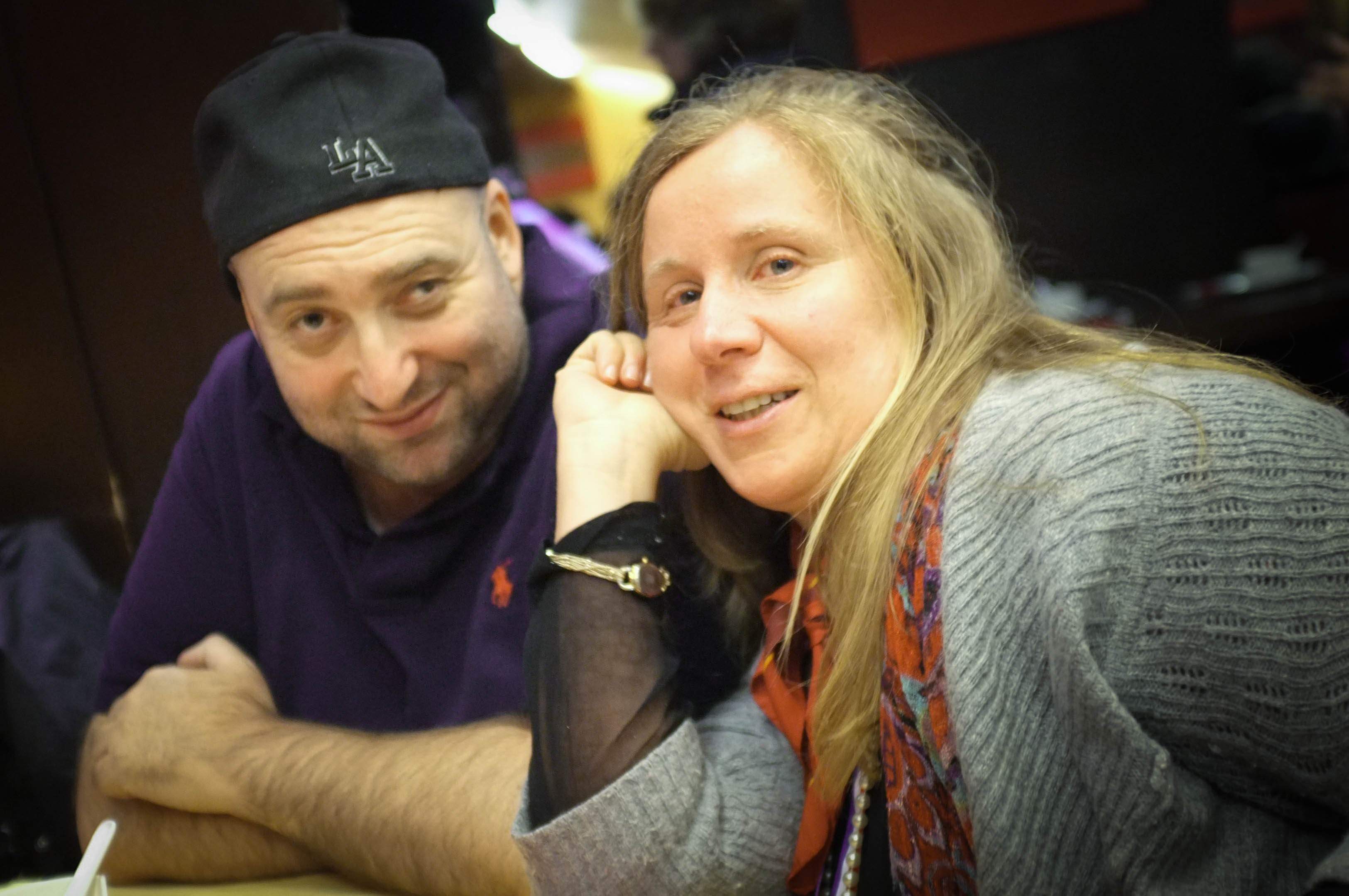 Falafel and his close friend Simonetta Barone in London in 2014

He had an uncanny ability to instantly recognize a backgammon position, simultaneously coming up with the correct analysis. He could do this faster than anyone else. This ability combined with his rich humor made him not just the best player in the world but also the best commentator in all of backgammon.

He never tired of watching others play, often even falling asleep while observing. Suddenly he would wake up and said: "it's a good play" or "Stupid." AND HE WOULD BE RIGHT! How is it possible to do that? I felt like watching the greatest magician perform a magic trick.

When TV news showed someone suffering, Falafel disliked it and said this terrible situation should be changed. His way of thinking was pretty simple: If people were suffering, we must help them.

PURITY & ETHICS OF THE GAME

Falafel’s sense of the ethics of the game was impeccable. Falafel hated illegal plays long before "legal play" rule became popular. (In backgammon, accidentally misplaying the checkers -- usually from misreading the dice roll -- is called an illegal play. Modern rules require the opponent to point out any misplay.)  Falafel always wanted the game to be formal and pure and never hesitated to advocate for the ethical position. This thinking process is so natural for him that it's like breathing, not even an option. After listening to Falafel’s philosophy, I began pointing out illegal plays even to my own detriment. In 2009 Menton Open (France), my opponent made an illegal play, which reduced his equity by a lot. I have a devil at the bottom of my mind that might make me pretend not to see his illegal play. However, I fully adopt Falafel’s ethics, and even though my opponent’s misplay was much in my favor, I asked him to correct it (finally, I won 1st Menton Open).

In 2013 May, Falafel suddenly suggested me to stay in the USA for two months. It was the last day of the Chicago Open always the end of May. He continued, "You don't need to pay for the hotel and food. I take care of everything. Also, you might earn some money."

Though I was supposed to go back to Japan the next day, I accepted his offer and cancelled my ticket for Japan. For the next two months Falafel and I were together 24/7. I learned he is a terrible snorer (!), but I got used to it quickly.

I thought the biggest positive side of the journey is that I can discuss backgammon positions anytime. The world's GOAT is always next to me! Well, it didn’t exactly work out that way. The truth is that Falafel often acts alone, and I needed to find the proper time to ask him. Even with that it was a dream situation for a backgammon player like me, so hungry to pick his brain.

During this time, Falafel had a special student, a very wealthy man. When Falafel gave lessons, I was always with him as his assistant. My title, “world #2,” worked well. The student was a busy and important man, so we got noticed the date of the lessons only one day before or the same day. Of course, he paid handsomely, and I very much needed this sufficient income at the time. I am forever indebted to Falafel for his generosity in sharing his student with me.

By 2018 the cancer tumors had thoroughly invaded his body and it was hard for him to walk. But he came to the 2018 World Championship in Monte Carlo with Tobias Hellwag pushing his wheelchair. Though Falafel did not play in the tournament, he commentated for the final of World Championship with just as much insight and humor as usual.

Then, on the last night of the tournament, during the presentation of winners’ trophies, Falafel was called to the stage. Everyone wondered why, since he had not played in the tournament. United States’ Joe Russell, himself a world champion (1989) and now Chairman of the Board of the United States Backgammon Federation, presented Matvey Falafel Natanzon with the USBGF’s “Lifetime Achievement Award.” You could tell how Falafel was so moved by this recognition. People were cheering and crying -- thrilled by Joe’s speech and Falafel’s award but sad to see this giant of a man in his greatly weakened condition. His great friend Sander Lylloff was next to him, supporting him the entire time. I was also on the stage since they gave me the Gentleman Prize. When Falafel received the trophy, I felt an overwhelming  mixture of pleasure and sadness for my dear friend. 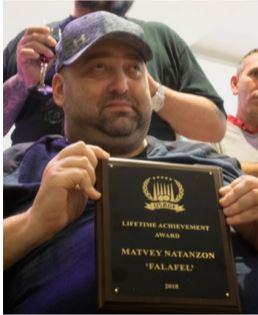 In early January 2020, I was wondering whether I should fly to New York and see Falafel in Buffalo. My schedule was so tight that I was about to give up visiting the USA. However, Daphne Downs, a very close friend of Falafel's gave me sensible advice: If you don't visit now, next time might not come. She understood Falafel's situation very well, as she studied medicine at university for seven years in addition to being a fine backgammon player. Her words pushed me to buy an airplane ticket to New York. First, I played in the New York Metropolitan Open but did not cash. Patti Rubin asked me to deliver a gift to Falafel, which was a handy set of chouette markers to show who is in the Box and who is the Captain. The next day I flew to Buffalo with Mochy. We were the Giants #1 and #2 going to see the GOAT for what we hoped would not be the last time.

He was a patient at Brothers of Mercy Nursing & Rehabilitation Center in Clarence, NY, just outside Buffalo, but no medical treatment was working for him. When Mochy and I talked to Falafel, he replied with a clear voice, correctly mentioning Mochy's name and my name. He also could eat by himself. As he had asked me in advance to bring some backgammon positions, I printed out many positions and brought a pile of paper. Falafel saw the first position and started thinking but did not venture a single opinion. That was when I sadly realized this would be the last time I would ever again see my dear friend, and my heart was utterly broken. 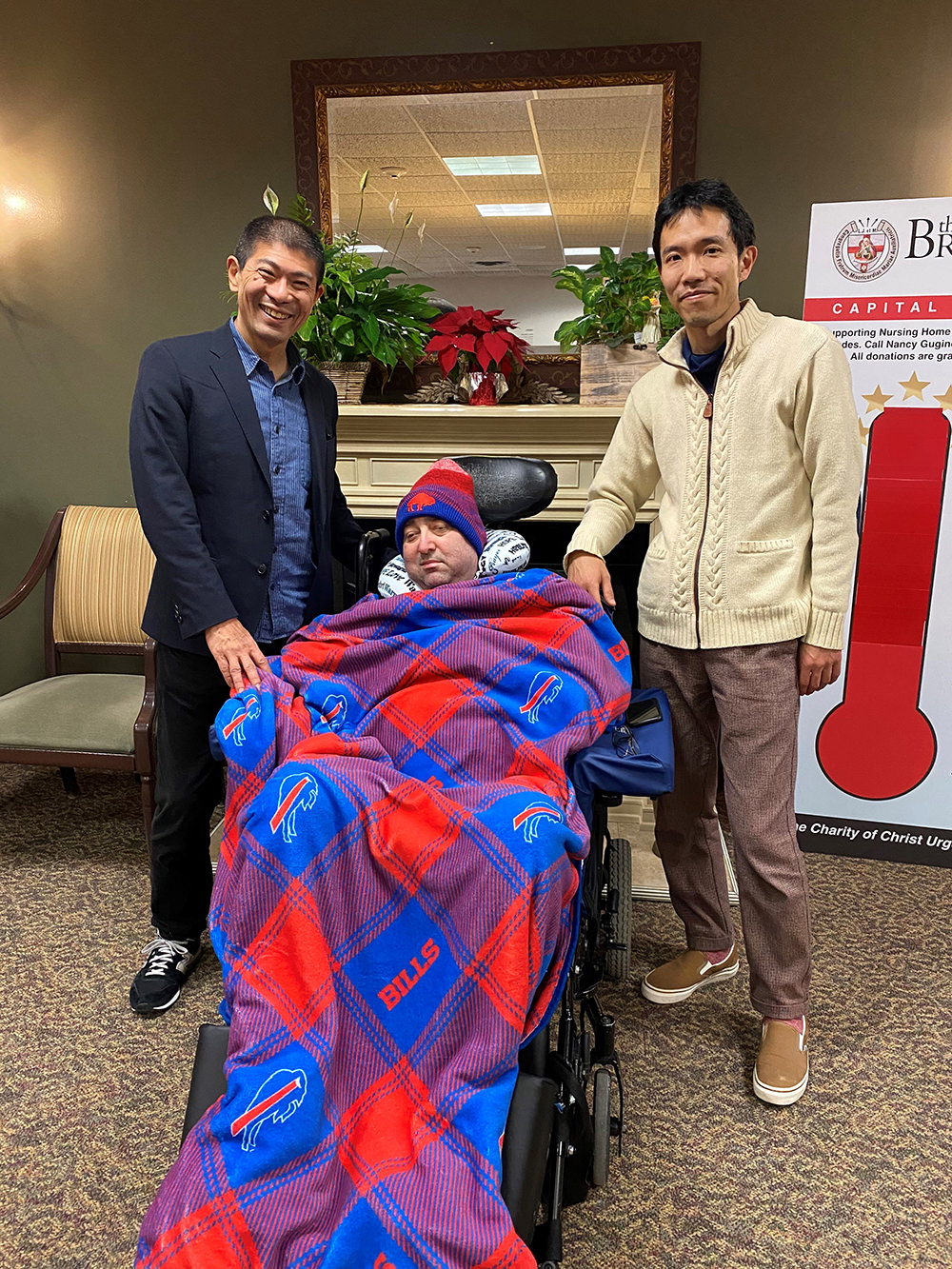 Michy, Falafel, and Mochy at the Brothers of Mercy in Buffalo in New York

I must state it explicitly that Falafel was blessed at the nursing home. His mother, Larissa Rein, visited him daily with food and took care of all medical needs. His sister Elaine Lewis came from England to help her mother and provide Falafel with a sister’s loving care. Also, Falafel had three extraordinary caretakers at the Center. He could not have had better care among these three women. Mochy highly praised all of them as they always did their best to the patient. You could tell they passionately cared about his well-being. Here are the names of them who belonged to "Jamie's Helping Hands Home Health Care Aides."

GOODBYE MATVEY “FALAFEL” NATANZON - WE WILL NEVER FORGET YOU

Falafel’s spirit and intense love of all aspects of the game affected all backgammon players who were lucky enough to be in his presence. We enjoyed watching his game, talking to him, listening to his entertaining commentary, and even just seeing him walk (this is not a joke. Watching his walking makes me happy).

ONE FALAFEL LEGACY - THE “ISLAND” CONCEPT

Around 2013 in Las Vegas, Falafel mentioned the term "Island" which is the situation where each point in the outer field has only two checkers. You want to avoid an Island. Here is an example. 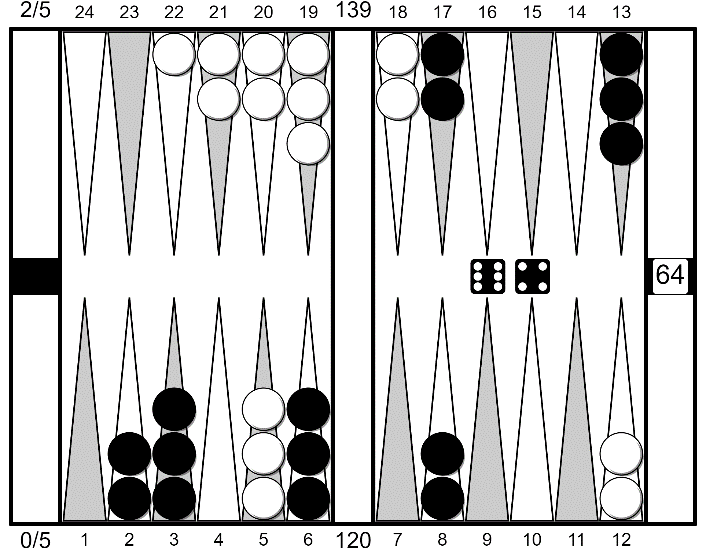 13/3 is the obvious choice, but the resultant position is "Island" because the 8, 13, and 17-points now have two checkers each. We would like to avoid "Island." 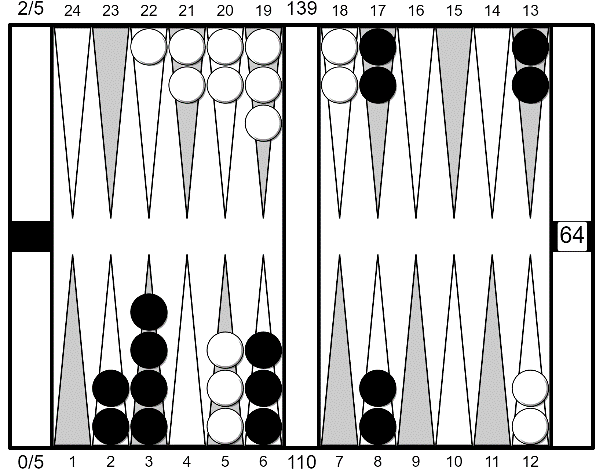 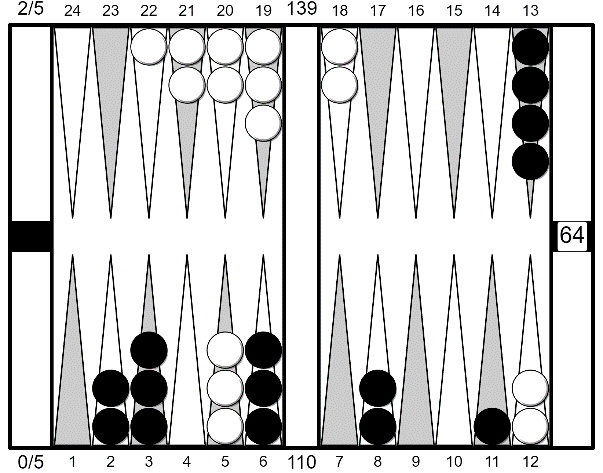 The concept "Island" is so beneficial that I often use it over the board. I bet Falafel never expected his casual comment to affect me so much! 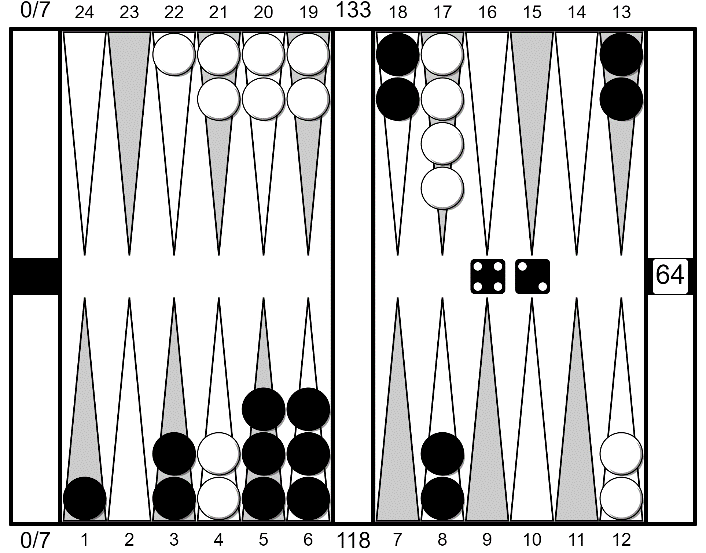 Black chose 6/2 3/1 over the board, which does not leave a shot. However, as you already know, the resultant position is "Island." 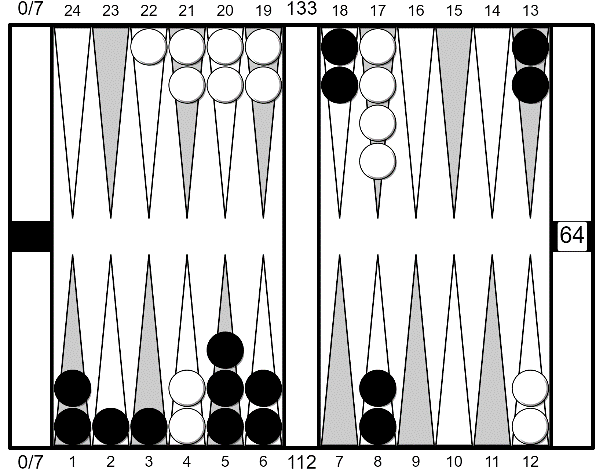 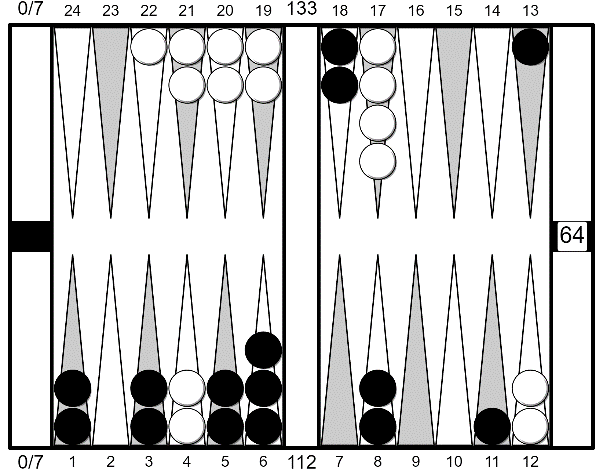 I am pleased to announce that I am collecting many Island positions to improve my skill and write a new book!  I will dedicate my Island book to the memory of my dear, dear friend Matvey Natanzon, who has inspired me in so many ways.